What a 23 days it has been. Now pass the eggnog and let’s celebrate!

Well, we just saw one.

Raising $8,500 in 23 days to publish a book seemed possible, but not easy. This was no professional marketing blitz or publishing house-powered media campaign.

It was just a few of you and me. But that was more than enough.

I have to be honest: it started off slow and I was nervous. A few passionate, kind friends spread the word and pre-ordered The Variable Life, and I was grateful. But I was still uneasy because the numbers weren’t the kind of numbers I saw from other successful campaigns.

But over time, some of you showed up. 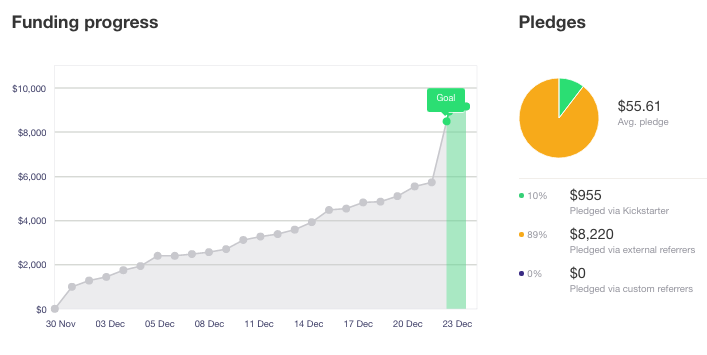 And slowly but surely, you showed up some more.

And you invited your friends to show up, and even strangers on the Internet showed up. (check out the progress in this Twitter Moment)

[It’s interesting, isn’t it, to realize the people you expected to show up are nowhere to be found—and to see people you never expected are actually the ones who show up when you need it most?]

And during the final day, you raised thousands of dollars to cross the finish line—and then some!

Because 165 of you believed in The Variable Life enough to do something about it, you showed up. You ordered the book. You gave generously. You had the power to bring this idea to life, and you used it. You made a difference—not just for me, but for every person who reads this book and dares to step into their own lives with more love and courage.

Because 165 of you, The Variable Life is getting published, rewards will be shipped, and more people will gain clarity and confidence in a world of choices.

“I ordered a book through the Kickstarter campaign. When will I get it?”

“When will my credit card be charged?”

Kickstarter will collect and process the pledges in the next 14 days. After that, the funds will be transferred to me and I’ll complete payments to my editor, designer, and all the other costs involved in getting this book published and released.

“I didn’t order a book through the Kickstarter campaign. When can I get one for myself or for someone else?”

Once the book is finalized in the publishing process, pre-orders will be shipped by February and the book will likely be available on Amazon (printed and Kindle version) by March 2017. Want me to remind you when it’s available? Send me a message on Facebook, Twitter, or Instagram and type REMIND ME.

Send me a message. I’m glad to answer as best I can.

I’m going to sign off, enjoy Christmas and New Year’s festivities, and I’ll be in touch with you about your rewards and shipping details. Pass the eggnog; here’s to you.

Peace to you and yours,

John Weirick is a Minneapolis-based versatile writer and editor who specializes in feature stories, web and digital marketing, food and drink, travel, and culture. He is a published poet and the author of "The Variable Life: Finding Clarity and Confidence in a World of Choices" (thevariablelife.com).

This site uses Akismet to reduce spam. Learn how your comment data is processed.